View source
watch 01:36
We're Getting Mutants in the MCU - The Loop
Do you like this video?
Play Sound
Jared Topol 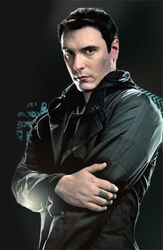 Jared Topol was born Jared Starchaser on the Passenger Liner Lightning to a current Imperial TIE pilot and a former Corellia Security Officer. Anne-Marie retired from field work when she was pregnant and worked as a consultant and advisor for the younger officers in the Smuggler Interdiction Unit. Coren Starchaser was the typical fighter pilot, flying at the top of his game, even if it meant not hitting into the 181st Fighter Wing, he still had a healthy ego and swore he was in a squadron of some importance.

Home life for Jared was relatively simple, go to school, get good grades, stay out of trouble and be ready to move from place to place. Thankfully, the wonders of hyperspace and location of his father's squadron as a Core Worlds squadron allowed he and his mother to remain on the home world. Well, hers at least. Jared, through school idolized his father but because of his parents telling him to follow his own dreams, worked on his own ideas of what he'd like to be when he grew up. When time came for higher learning, he opted to not head to the Imperial Academy and instead went to the Corellian University of Science and Technology, Coronet Campus. Finishing in three years with a degree in Materials and Chemical Engineering, with two minors, one in gravity well science and the other in general astrogation, he set out to find himself.

Traveling the galaxy for a year, and remaining in Imperial Space, he had come across his fair share of officers who knew his father. And knew him as a play boy, smart mouth with more ego than anything, but the people would state that it wasn't without reason. His father was a brilliant pilot, just a bit... overt about it. This confirmed and solidified what Jared wanted from life and he set out to join the Empire and show that not all of the Starchaser line was a cocky fighter pilot, some where shining officers. Of course, he adopted his mother's last name, so as to not stir up controversy.

To say Jared comes across as a robot is very unfair to robots.  The young man is out to prove himself in the greater galaxy and the Empire most specifically.  He has a focus that at a young age put him off to the wayside with friends, and handicapped his ability to get to know people in a suave manner, reducing him to being awkward at the best of times. His drive is starting to show signs of wanting to enjoy all that life has to offer, but conflicts with his want to be the best officer he can be. HIs interests include not getting executed, running sims way too many times, and traveling the galaxy in order to kepe up clandestine sort-of-dates around the galaxy.

To the sound of a heartbeat pounding away (Jared Recruitment)

Seven with One Blow (Damon/Jared)

Interactions Outside of SGE

Nothing Comes for Free (Damarys/Jared)