The SWRPG Wiki
Register
Don't have an account?
Sign In
Advertisement
in: Characters, SPR Members, The Sovereign Principality of Ruusan 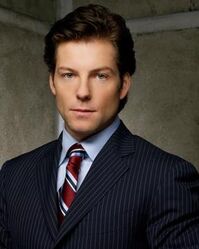 Jai is quiet and calculating, not given to impulses of rage or anger. Instead, his is an anger of cold retribution. He is loyal to those he respects or exhibits more power than he has. He is not a forgiving person and does not lend himself to compassion and kindness to those he sees as wicked and corrupt.

He is always observing everything that goes on around him and not much gets by him. He has near perfect recall of things seen, heard, smelled, or read.

Jai constantly fears that he will suffer from the same mind disease as his mother. What he does not know is that his mom’s condition was caused by a virus… it isn’t hereditary.

Jai was born into an abusive home atmosphere. His mother was an untrained force user who suffered from what most people believed to be dementia. In actuality, it was a virus that fed on her brain and caused her to slowly and painfully lose control of her cognitive and reflexive abilities with more and more frequency. His father was an abusive man, who blamed his lot in life on his wife and children. For the first 8 years of his life, he endured the beatings and screaming and stood in for his mother so that she wouldn’t be beaten. He vaguely remembers a sibling, but they were sent away when Jai was a young age. He can’t remember what happened to them or where they are at now.

When Jai was 10, his live changed, putting him on the path that he was now on. His father came home drunk after work and passed out. The next day, fighting a hangover, he went out to see that his speeder had a damaged panel on it. Forgetting that he ran into another speeder on the way home, he attacked Jai, dragging him outside by his neck and slamming him up against the speeder, accusing him of doing. His mother raced out after both of them and in a rare moment of clarity, used the force to lift the speeder and drop it on her husband, while also pulling Jai away. Tarius was crushed and with no other evidence to the contrary, it was deemed an unusual accident. At that moment, Jai thought that his life would begin to get better.

A few days later, his mother succumbed to the virus and died, leaving him alone and with only a few credits to his name. From then on, he had to take care of himself.

Unsurprisingly, as a teenager, Jai led a life of petty crime, stealing the necessities to live on, like food, and clothing. He would hide out in vacant buildings at night to sleep. He became very adept at taking care of himself. It was during these years, that Jai began to experience strange occurrences. In one instance, when the police were looking for him, he willed them to leave the area. In another, he willed a market owner to give him food. At the time he thought that it was strange luck, but it always took him back to his mother.

When he reached the age of 16 his life did change forever. In one selfless moment that would change his life, he happened upon a wealthy man who was suffering from a seizure, grasping his chest. For some reason Jai decided to help. He steadied the man and put a hand on his chest and kept saying over and over again, “You’re going to be okay, You’re going to be okay”. He kept repeating it until the man’s breathing slowed down and his heartbeat went back to normal.

Taken by the selfless act, the man took Jae under his wing and began to tudor him, trying to catch him back up to where he should be in his education.

Jai loved his studies. He found that he could remember almost everything that he saw, read, heard, or smelled. It just stuck with him. The older man, who’s name was Callius had suspicions that Jai was a Force Sensitive and began to harness that power.

Callius wasn’t force sensitive, but he did have contacts that could direct that power and would pay good money for it. When Jai reached the age of 20, he was admitted into the most prestigious universities on the planet and took an interest in the political landscape of government. The subterfuge and intrigue was something that enticed Jai immensely, but he also had a strong streak of justice running through him. Time and again, he would support the candidate that had the most integrity and character. It would be through beings that exhibited these qualities that the galaxy would be brought back into balance - not through weak willed politicians nor the power hungry ones. He threw himself into the political area, using his abilities of influence to help those that he worked with to achieve their positions.

With the coaching and backing of Callius, Jai took on the role of a free lance political advisor. It seemed the Force led Jai to the elections that meant the most. Using is ability to influence voters, Jai turned the elections around for the underdog who exhibited the highest level of integrity.

And on those few occasions where there were too many voters, then the corrupt politician would either mysteriouly vanish or die of some unknown health condition.

Jai felt bad about killing the corrupt ones, but it was for the best. The greater good weighed out over the morality of murder.

Jai could never stay in one place for too long, lest someone tie him to the unexplained turnarounds in those elections. So for the next 7 years, he traveled around the New Republic and Independent Worlds, plying his trade as a political advisor. He had raving recommendations from his previous employers... employers who were now high up in their career and making changes for the better. During this time, Jai was careful to not influence an election where the outcome was too scrutinized... like planetary governor elections and such. Still, if the winner was corrupt, sometimes their stay in office was cut inexplicably short.

Jai also knew better than to try his hand in the Imperial held territory.

So it was for 7, this was Jai's life... righting wrongs and trying to make the galaxy a better place. Mind you he was being really well paid for it, but life was looking up.

Then he took a job that he should have turned down. It was really a small time election of a city official on Corellia's Capital City - Coronet City. It was a big union boss going up against a man who used to be a teacher. Under Mr. Jan-dola, the city had been overrun with corrupt officials and organized crime. Mr. Elders, the underdog had promised to clean up District 12 and Jai saw fit to help him.

After the stunning election in which Elders won with 72% of the vote, hired thugs from Jan-dola showed up. As the shooting started, Jai dove for Elders, knocking him to the ground, but it was too late, a laser blast hit him through the chest, killing him. Jai was able to protect himself by hiding behind a metal desk. The men left and Jai vowed to even the score.

Officially, Jan-Dola condemned the attack and wanted to call for a special election, but Jai talked Mr. Elders widow, Craya to step in for him. She agreed and the populace rallied behind her.

With that taken care of, Jai turned his attention to Jan-dola.

Two nights later, as Jan-dola was sitting in a restaurant enjoying a nerf-steak and a glass of Churban Brandy, he collapse with a coronary stroke and blot clot to his brain. The Medical Examiner had said that he had never seen anything like this and it must have been a very slow, painful death.

Then, each night after that, another one of his henchmen died in a gruesome, brutal way. By the time that the 5th one died, the police began to suspect foul play.

Knowing that his time on Corelia was done, Jai left the planet and set his sites on Telos. While he had enough money to buy a fleet of ships, he preferred to travel with the populace. You always heard the best rumors and opinions from the people around you and that is where Jai usually started his next job.

Jai knew very little about his family. What he has learned has been after the fact, using favors and resources to piece it together. So far, he had found out that his mother was strong in the force, but was plagued by dementia. His father physically abused both of them. In a moment of clarity, his mother defended herself and crushed him with a speeder. Jai also suspects that he has a sibling that is also force sensitive, but he doesn’t know who or where this sibling is.

My character gained the rank of Acolyte on [insert link to promotion thread here]. My character was trained in the following force skills and abilities:

My character achieved the rank of Templar on [insert link to promotion thread here]. My character was trained in the following force skills and abilities:

My character earned the rank of Archon on [insert link to promotion thread here]. My character was trained in the following force skills and abilities:

Behind the Scenes - Jai is contacted by the Dark Jedi Phoenix