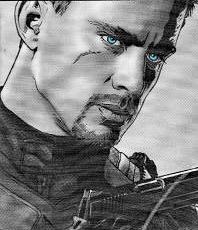 Keenan was born in a military family on Corulag; his father Stellan was an Imperial Naval officer serving in the Corulag Imperial Academy, while his mother Ysanne worked as a distinguished physicist in Sienar Advanced Research Division spending her entire academic career developing new starship designs including prototypes of TIE fighters. The two met when young Stellan was assigned as test pilot for new vessel prototypes, being top-notch pilot of his class, while Ysanne worked for Sienar Fleet Systems as an intern. After developing a sporadic friendship, they parted ways only to meet again five years later, during their mutual visit to Vensenor Flight Academy; Ysanne to present her newest ship designs that earned her a doctorate, while Stellan attended as a young Lieutenant and pilot in the Imperial Fleet. Only two months later they married, only to be blessed with a son a year from then. Stellan and Ysanne used every free second of their time to spend it with their son in an idyllic house in residential area of Curamelle; when obligations allowed, they were truly a family. Their happiness was shattered into pieces when Keenan's mother was killed in a Rebel attack during the final year of the Galactic Civil War, when Rebel troops stormed into her laboratory and shot her unarmed. Her death devastated Stellan, turning him into a bitter and lonesome man, his dedication to the Empire now unquestionable.

Finding himself unable to take care of his son, he sent the eight year old Keenan to Imperial boarding school at Academy of Carida. Over the course of years, father and son grew apart; Stellan made the loss of his wife a personal revenge. Despite earning the rank of Commander, he continued to fly with his squadron, popularly called Stormfist, gathering some of the most versatile pilots the Empire had. Enjoying an almost iconic reputation among younger recruits, Stellan became a role model of a dedicated soldier without willingness to compromise. It was that particular trait of his that caused him to spot Tatiana Renkl among new emerging commanders and characterize her as the type of officer that would forever change the face of the Empire. In all his servitude, Stellan had forgotten he had a son; it was only when his own flesh and blood was presented with a prestigeous Imperial scholarship to attend the Vensenor Flight Academy that the rogue commander remembered he was not alone in this world. In order to mend broken bonds, Stellan scheduled a meeting with his son on Bastion, but he never made it; his squadron was ambushed by Rebels near the Hydian way and nearly destroyed in cross-fire. Sacrificing his life for the life of his young wingmates, Stellan earned himself a horde of honorary medals and a funeral with all military honors. His father's reputation was always a heavy burden to carry on those young shoulders, but Keenan never considered failure as an option.

Apart from academics, Keenan is a fully trained TIE pilot, with over 10 000 hours of flying and over 70 missions he attended as student in various Imperial training centers on Carida, Vensenor and Bastion. He is rumored to be one of the most perspective pilots even before he finally formally enlisted in the Imperial Navy.

With both of his parents deceased, Keenan has no living family apart relatives back on his home planet - although all connections with them have been severed.

My character was trained by [insert name of Master here]. My character took part in the following storylines:

Retrieved from "https://swrpg.fandom.com/wiki/Stormgald,_Keenan?oldid=19176"
Community content is available under CC-BY-SA unless otherwise noted.