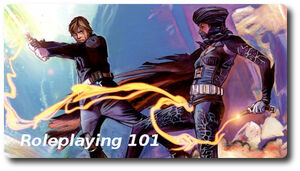 In the world of Storytelling Roleplaying, there are many important factors that can contribute to your success as a writer, roleplayer, and community member. What follows is something I've done in the past several times, and explains some of the basic principles of Storytelling.

When you initially create your character, it's often best to have an idea of what you want the character to be about right from the start. Have things about their past, appearance, and other details that make the character real unfold over time. If you haven't got a full back-story - no biggie, make it up as you go along.

Some things to mention in passing as you're developing your character can include the clothing they have at the time, hair, eyes, mannerisms, etc. It can do wonders.

Retrieved from "https://swrpg.fandom.com/wiki/Roleplaying_101?oldid=20511"
Community content is available under CC-BY-SA unless otherwise noted.