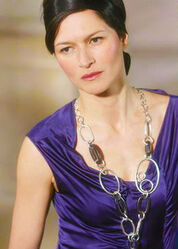 Tatiana Renkl was born as the elder daughter to a couple of Bakuran aristocrats, and spent all her life on the planet in the familial property of Salis D'aar. When she was three years, her sister Tamara was born. The Renkl couple was always careful that their daughter received a perfect education, and Tatiana also began to train in the art of fencing as from a young age, due to her taste for physical exercise. Being the more brilliant of the two children, she graduated from high school level education when she was fifteen.

Afterwards, she attended the Bakur Senatorial Academy, though she didn't chose on spending a post graduate year to Coruscant. Raised under Imperial occupation, Tatiana was already willing to serve the Empire as it was the right system in her mind. Yet, she declined the offer she was made when graduating from her senatorial course at nineteen. Due to the civil war raging in the galaxy, she decided to join the Navy, feeling that she would be more useful as a fighter, than as a senator.

With her sharp mind and brilliant qualifications, Tatiana entered the Corulag Imperial Military Academy, staying there for five years, hence being the first of her promotion at the age of twenty-four. During her first two years there, she was known to be quite violent, and never apologizing for anything when she thought - and knew - she was right. Turning into an even more cold blooded Navy Officer, Tatiana earned her nickname "The Kinslayer" during her participation in the Galactic War, due to her very strong will and absence of hesitation when it came to killing.

The Path to Military LeaderEdit

After graduating from Military Academy, Tatiana Renkl continued her brilliant career in the Imperial Fleet. She served under many Commanders, including her former instructor Stellan Stormgald. Her sense of duty was never faltering, and she was also careful to work with the other branches of the Empire, to help making the faction work as good as possible. This is also how she met the one true friend she ever had, Celcia Verdelet, the current Imperial Intel Leader.

Her dedication to the cause, as well as her strong will and connections made her win everybody's respect, and helped her rebuilding the Empire. All her achievements finally led her to become the current leader of the whole Military, Army and Navy, of the Sovereign Galactic Empire.

When the previous Emperor was almost killed during an attempted coup against the leading triumvirate, Tatiana took over the throne. Since then, she has remained Empress and dedicated herself for the greater good of imperial citizens through new means. Yet, she retains close ties to all branches, as she strongly believes in cooperation. She has helped reforge an alliance between Sith and Imperials.

She eventually married with smuggler Cronus Noir and the couple welcomed quadruplets, new additions welcomed by the rest of the Renkl older children.

Offered a high education, in both diplomacy and military, Tatiana possesses a fine instinct for handling difficult situations that are heavily politic related, even if obviously her military skills outdo the senatorial ones. She has always been careful to keep an eye on Intel and Government as, for her, it was the combination of those three pillars that could keep the Empire together.

A Navy Officer at heart, the Empress is still a very skilled pilot, though she is mostly in command position during conflicts, then using her high sense of strategy, to coordinate the Fleet, as accurately as possible. Yet, she is also used to handle Army situations, due to her formation.

When it comes to weaponry, she can use either blasters or knives, and practices fencing and martial arts to keep in shape and ready for any combat situation.

Retrieved from "https://swrpg.fandom.com/wiki/Renkl,_Tatiana?oldid=39855"
Community content is available under CC-BY-SA unless otherwise noted.