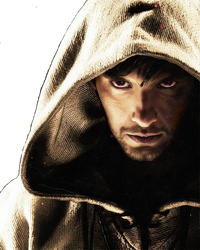 "Knowledge, it is the thing that can make or break anything.
Without it we cannot live, cannot fight and we cannot move forward.
All knowledge is worth having, as long as you are prepared to pay the cost of getting it."

- Nova; when asked what is one thing that is important to him.

Nova has a lean and slim muscular build, ruby colored eyes and his hair is a blue black that goes a bit past his neck. It's short in front with bangs that if he wishes, cover his eyes. His eyes are his most notable feature as it looks like someone took the exact color of a lit ruby and gave him that color. He has a lean face with high cheek bones and his eyes have a lot of expression, if he chooses to show it. His skin tone is a pale honey color. In his rooms he'll simply wear loose pants and that's about it preferring to be comfortable. However around people he tends to dress more business casual or as the need calls, formal.

A Sith Lord commanding great reserves of knowledge and skill, Nova is a notable exception to the typical ranks of the Sith. His greatest weapon, without equal, is his intellect. Where others see obstacles to overcome, he sees opportunities. He is far more long-run oriented than the majority of the Sith Empire, and is more interested in learning and becoming knowledgeable on things than gaining power, which he sees as a by-product but not the ultimate goal. He is conservative in speech as well as action, and will most often assume the role of an onlooker in events rather than a participant so he can properly see all the hidden angles. While not 'cold' per se, he's objective and calculating above all else. In combat he prefers to react instead of play the aggressor in an effort to see weaknesses to exploit. His mannerisms and personality traits project him as a natural leader to the future Sith, though many will not agree. He's surprisingly respectful and cordial even to Jedi, which shows he can make friends in places more 'traditional' Sith cannot. It will be worth watching to see where the Empire goes if left to his leadership.

(Special thanks goes to Verrj who was willing to take the time to read what I had originally put in to summarize and condense it in to the awesomeness it is now.)

Nova’s mother, a slave, was the surrogate for him when her master Jarden Nothrael decided to make an engineered child to accomplish his desires. For the first four years of his life he was in his mother’s care, till he took him from her and killed her. Once within his care he started his training, spending the next five years in hell. His training started first in simply learning to survive, fending off the attacks of the other slaves and learning to endure cruelty. He wasn’t allowed any comfort or kindness, the other slaves were ordered to treat him this way or suffer worse punishment. As a result he was abused for they took this chance to hurt him in as many ways they could so long as they didn’t scar him or kill him.

This was a test of his adaptation and resilience, which then turned into tutored training once he was nine. He learned the basic education, reading, writing, math, but punished for any kind of failures, even imagined. His training was put further to learn to tell lies, to manipulate others, to cheat, steal and blackmail. He was given lessons in art, dance, even in physical things like posture, balance and more. When he turned thirteen he was even taught how to seduce and to please. All the while during all of this, he masqueraded as his makers beloved heir. Outside he was seen as one thing, but Jarden made sure his little pet knew his place when those eyes were not upon them.

Over time he was given certain freedoms which he used to undermine the man, culminating in his ruin when he turned sixteen. At that point he erased any ties he had on Kuat, taking everything from his maker, including the very research that made him and left. The heir and mask Avonus Nothrael died, and Serian Corsair Loria took his place. He spent months hunting down a rumor of the Sith, learning what he could from a distance before he went to Munto Codru. Upon his arrival and acceptace, he dawned a new mask by the name Nova, the name that he took as his guise within the Sith.

Sith Sword
Given to Nova by his teacher James the day he got his promotion to Warrior.
It had been his teacher's sword before him, given to him by family.
One of two weapons given that day, the first ever 'gift' that he's gotten that has importance to him.


Saber: Necron-
This is Nova's first true saber, it used to be his teachers and like the sword he was given it has importance to him.
This was his teacher's first Saber, now Nova's, the black blade is unique and suits it's new wielder.


Asha-
This Saber is Nova's first he made himself. It's blade is black, but streaks of white lightning streak along the blade. He made this with the help of his teacher, it's name means 'Existence' and or 'Truth'.

The perfected project made by Jarden Nothrael (Deceased) from the DNA of Avonus Nothrael his nephew.

James Icarus later on claimed him as his 'son' even before the masked man got married and had his own family.

Nova was also claimed by Raien Keth as an adopted brother, was also allowed to claim the 'Keth' family name.

When promoted to Master he'll learn:

Retrieved from "https://swrpg.fandom.com/wiki/Nova?oldid=41410"
Community content is available under CC-BY-SA unless otherwise noted.