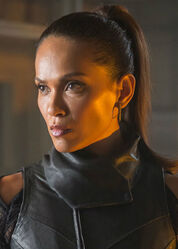 Fireya was adopted by a Chandrilan family who already had two biological children: Lana and Cronus. She was raised in the upper social circles of Chandrila, her parents expecting her to follow in Lana's footsteps and become the perfect lady and marrying a suitable party.

While she loved being able to benefit of good education and graduated in history, Fireya didn't want this life and was thirsting for adventure. She had been trained in martial art and fencing since her childhood. When she broke with familial tradition, she became a treasure hunter across the galaxy, enjoying the life in the underworld.

After years working on her own, she eventually decided to dab into actual bounty hunting and began working for The Hutt Cartel.

Retrieved from "https://swrpg.fandom.com/wiki/Noir,_Fireya?oldid=39945"
Community content is available under CC-BY-SA unless otherwise noted.