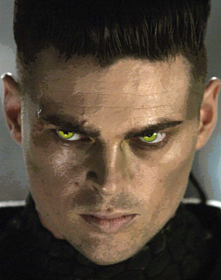 
Naberius is a Force-sensitive Grand Paladin of Iziz city on planet Onderon.

Naberius is the only child of Geela, the late tribal leader of the infamous Beast Riders. During one of the annual hunts, Geela rescued Vigil, the crown prince of Onderon, from a pack of hungry bomas. Heavily injured, Vigil was taken to Geela's secret hideout to recover; upon finding out about his ancestry, Geela seduced the prince using a hallucinogenic potion. Upon quickly healing due to shamanic herbs Geela applied, Vigil returned to Iziz, soon forgetting all about his episode amongst the Beast Riders. Nine months later, Naberius was born - a direct descendant of Queen Talia, the boy was the blood heir to the throne of Onderon. Raised in a tradition of Beast Riders, Naberius grew up on stories that fueled his hatred for Vigil, who was crowned king of Onderon shortly upon his return to Iziz. Geela convinced her son that the king killed his father, telling him nothing of his true heritage; on the eve of his eleventh birthday, Naberius, his mother and the horde of Beast Riders attacked Iziz, mounted atop the ferocious drexl. Geela was killed in combat, while Naberius was captured and brought before king Vigil, who admired his heartiness and spared him. The king ordered the boy to be trained in the arts of combat to become one of the paladins of Iziz. However, Naberius was difficult to train due to his stubbornness and inherent hate for the king; he was thus put in the hands of the old, albeit merciless Grand Paladin Borse. Upon firstly breaking the boy down, he forged Naberius into a formidable warrior worthy of title Grand Paladin. When Borse died, Naberius assumed his title upon passing the trials.

Nine years after his stay with the Beast Riders, Vigil married Countess Kista Selmur with whom he had a daughter. As the only child of the king, Moraine was appointed crown princess and would inherit the throne upon her father's demise. When Moraine was a small child, she suffered from a curious disease doctors were unable to identify, let alone cure. In utmost despair, Vigil sought help from the Beast Rider shamans. Geela's mother, a witch named Zu, answered his cry for help and came to see the girl. With the use of potent yet mystical herbs, the sorceress cured the child. Curious at the workings of her magic, Vigil tasted some of the elixir too, which subsequently brought back memories of his times with Geela. Zu reminded the king of an ancient prophecy which foretold of taking of the throne by a drexl rider, in whose veins runs the blood of Freedon Nadd. It didn't take long for Vigil to put two and two together - the Grand Paladin of Iziz was his son. He only spoke of this on his deathbed, telling Naberius of his royal lineage. Unfortunately, the conversation was overheard by Moraine's scheming advisors; new revelations ruined their plans of turning the princess into a puppet ruler.

Retrieved from "https://swrpg.fandom.com/wiki/Naberius?oldid=19533"
Community content is available under CC-BY-SA unless otherwise noted.