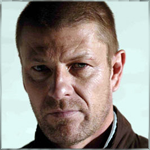 Alen was born and raised a Na’Varro, having grown up in his ancestral lands while his family was still a great power on Corino. His father Aran was a traditionalist, reverting his family’s ways back to how they had been when they were Kings and conquerors. Historically, the Na’Varro were savage raiders and warmongers, known for their ambition and cunning. Aran, being both ambitious and cunning, had designs on the throne of Corino and saw in Alen in his natural heir, choosing to groom him for a life of rule.

What Aran created, however, was an insecure, brooding child who was quick to anger and possessed a violent rage and a calculating edge. A success, in Aran’s eyes. However, before Aran Na’Varro’s goals could come to fruition he was betrayed, his keep sacked, and the Na’Varro clan was wiped from the galaxy. Or so it was thought. Alen, at age sixteen, managed to survive by hiding in a pile of dead retainers, and stole away in the dark of night. From that day forth the galaxy was unleashed on Alen Na’Varro, and he was lonely, angry and scared.

He spent eight years roaming the galaxy, keeping his head down and sticking to the scummier side of the stars. Running with smugglers and mercenaries, Alen increased in confidence. In this time he came to realise his Force Potential by sheer accident. Perhaps the rumours of the first Na’Varro being Sith weren’t untrue after all? However, he had no intention of joining those darksiders, having come to realise the evil in his father’s ways. If there was one thing he would never be, it would be to be like his father. As such, Alen set out to find the Aing Tii monks, win their trust and discover their secrets. However, that was not to be.

A momentary stopover resulted in a freak pirate attack and a forced landing on Ruusan, where Alen’s potential was quickly discovered by a local Dark Jedi sect called the Penumbra. Revan Luciano, a leader of that faction, sensed danger in the violent, angry drifter, but he accepted him nonetheless, on the proviso that he was watched closely. Soon after, Alen turned to the tutelage of another black sheep, Talus Vargas, and under his watchful eye the young man prospered. Time with the Penumbra dulled Alen’s pain and tempered his aggressive and ambitious tendencies, and soon he became a trusted member of the Dark Jedi sect. In Vargas, he found his first acceptable father figure, and after his master’s disappearance he obsessed with finding him and returning him home.

During this time, Alen found and rescued a long lost cousin named Ayumi, and fell in love with and married a Corino noblewoman, Eva Na’Cyra. He and Eva had twins a few years later named Aran and Aiko, and the Na’Varro clan began to reform on the ocean world of Gala. Alen and Ayumi forged a close bond, and after Alen disappeared in a search for his former master, Ayumi shared parental duties with Eva. Meanwhile, Alen’s search turned sour, as he was captured and drugged, forced to fight to the death amongst the sand and stone of a foreign backwater world. Eventually, Ayumi and her master, Alen’s friend Shyahwyn, found Alen and sought to return him home. Things did not go to plan, however ...

Having been returned to Ruusan, Alen’s character was fundamentally changed, and his outlook began to compromise with age. Taking on a new master and a new apprentice, the bearded man has begun a new journey. He recently met an illegitimate son from his days on the run, Marcus Albans, and his family continues to grow. All good things come to an end, however.

Alen Na'Varro was trained by Invictus and Revan Luciano. He was trained in the following force skills and abilities:

Alen gained the rank of Acolyte on 06-29-11. He was trained by Invictus, Nathanial K'cansce and Shyahwyn in the following force skills and abilities:

Alen achieved the rank of Templar on 12-31-2011. He was trained by Killian Quane in the following force skills and abilities:

My character earned the rank of Archon on [insert link to promotion thread here]. My character was trained in the following force skills and abilities:

A Life Like Mine - Alen and Shyahwyn discover Alen's cousin, Ayumi, fleeing her captors and bring her to Ruusan.

Join Me And Confront Your Fate - Alen brings Ayumi to the Garden of Twilight to be tested by the Penumbra.

Rebuilding What Was Lost - Alen and Ayumi fill each other in on their lives, and the intricacies of their family.

In The Face Of Death We Will Hold Firm - Alen, Gythe and Shyahwyn pursue Zephyrus Cloud, who has kidnapped Ayumi and threatens her existence

Hi, I'm Adam, a half-Australian, half-American hybrid. I'm currently studying Journalism and Economics at University, and hope to be successful at whatever it is I end up doing with my life. Apart from writing, I enjoy reading, looking at big trees, cloud-watching, physical fitness, boxing, jiu-jitsu, and of course, chicken. I'm always keen to roleplay, so if you have a plot and think Alen or one of my other alts can fit in somewhere, feel free to contact me.

Retrieved from "https://swrpg.fandom.com/wiki/Na%27Varro,_Alen?oldid=31419"
Community content is available under CC-BY-SA unless otherwise noted.