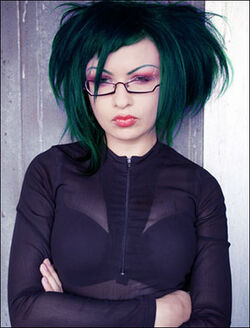 On the surface, Maeve (born Eaven Respa) is a conniving, carefree individual. Beneath a thick shell, she's a tiny, ruthless woman with a temper to rival her father's and a grasp on sanity that's less than pristine.

If Maeve's bright, naturally sea green curls fail to attract attention, the young woman's curves or her miniscule height are bound to. Along with several tattoos (one on each shoulder, one across her shoulder blades, and one around her navel), Maeve has a multitude of scars covering her small form. The most dramatic are the ones along her back, leftover from her days in Mistress Pimm's. There is also a single, long scar across the right side of her lower abdomen. Her right leg, and both of her arms, are cybernetic.

Maeve's attire includes a dramatic array of corsetry, fluffy skirts, and heeled boots that often give her a good 3-5 inches of extra height. Recently, she has been known to wear a pair of catseye glasses. Rarely is Maeve ever seen without a thick, black leather belt slung around her hips, with a small data-pad and often no less than 2 knives hanging from it.

"You always were such a needy child..." -Priscilla Respa

Eaven Respa was born to Arthur, the owner of one of the most successful shipping companies in Sodonna, and Priscilla, his wife. It was a life of wealth and luxury that awaited her. Unfortunately, Priscilla had not one motherly bone in her body.

When Eaven was the age of three, she was sent away to a pristine, all-girls boarding school known as Mistress Pimm's Institution of Etiquette. The place was strict, rarely (if ever) allowing the children within its walls to act like children. By the time they emerged at the age of twenty-one, they were so sheltered from the outside world that few of them kept their sanity.

Even from a young age, Eaven refused the Institution's teachings. She was a wild young thing, causing mischief and mayhem whenever the opportunity arose. Eaven still bears the scars on her back from a lifetime of lashings for her "improper" behavior. From the time she was five to when she finally left, she attempted no less than twenty-three escapes.

"Left", however, is a misleading word. When Eaven was seventeen, she finally decided that she, and the rest of the girls, had had enough of the cruel, stifling life within the boarding school. Over supper one evening, she managed to poison the entire staff, setting loose a horde of fifty-some young girls upon the surface of Teyr. Eaven herself stole the majority of the school's funds and went off-world.

"I may belong here, Killian... But I am no Sith." -Eaven Respa to Killian Quane

After leaving Mistress Pimm's, Eaven took much delight in her new-found freedom. She spent several months slowly working through her stolen fortune by exploring the galaxy, before eventually finding herself on the streets of Coruscant, where she - quite literally - ran into a crimson-haired man known as Killian Quane.

A Sith himself, at the time, Killian sensed the potential of the small teenager. He enticed Eaven with ideas of the Dark Side and explaining the ways of the Force to her. Eaven, having not seen a man for fourteen years, was completely enchanted.

Killian brought Eaven before the Sith Empire, where she was accepted as an apprentice to Bane Omnis. Under his teachings, she discovered a niche in the telekinetic side of the Force.

These newly learned skills were tested when Eaven found herself in battle against Chase Novis, a Jedi Padawan. During the fight, Eaven lost her left arm to Novis's lightsaber. To make matters worse, she inadvertently caused a landslide, and her right arm was ripped from its socket in the chaos. Despite having left the Sith Empire, Killian was the one that saved Eaven in the aftermath of the battle.

For a time, Eaven refused to use the robotic replacements for her arms, instead using the Force in place of her limbs. The side effects of such constant use of the Force, however, proved too draining for the Apprentice, and she was eventually forced to take the mechanical arms.

"Just sit back and enjoy the ride, Mother." -Gizelle

With Killian gone from the Sith, Eaven began to doubt her own presence within the Empire. During a chance encounter with a fearsome, armoured man named Lykaios, she began to understand why.

Eaven left the Sith behind to join the Galactic Empire. In what very well could have been the first of its kind, Lykaios requested that Eaven become his apprentice. Shortly afterwards, he also requested she become his adopted daughter.

With life better than she had ever known, Eaven settled easily into the Galactic Empire. She even managed to release her feelings toward Killian, when she met a white-blond wild card known as Lansing.

Eaven was swept off her feet by the man, and within a month's time, she found herself pregnant. It was less than a day later before she also found herself abandoned by the father.

During the first few months of her pregnancy, Eaven grew bitter and resentful toward the child growing inside her. She threw herself at any man that would have her, while her system rarely went without chemicals blazing through it.

It was Renhu'ka Mañad that saved her, from herself, in the end. Unfortunately, this was only after she tried to kill herself, losing the unborn child and any future chance of children in the process.

Even with her blossoming love and comfort in Ren, Eaven's problems were only just beginning.

Within a few weeks of her attempted suicide, Eaven started hearing voices. One, single voice, truthfully, that called itself Gizelle. The voice appeared in hallucinations as a blond teenager claiming to be Eaven's slain offspring. The lapse in sanity continued for months, as Eaven struggled to keep it hidden from those around her.

After a battle with Killian's brother, Draven, in which Killian's eyes were burned from his skull by his own lightsaber, things only got worse. Eaven blamed herself for Killian's drastic injuries, and the blame manifested itself by Gizelle becoming a full-fledged split personality.

After waking up in an unfamiliar room, only to find herself married to the naked man sleeping next to her, Eaven decided enough was enough. For nearly three months, she vanished from the Galactic Empire without a trace.

When she returned, Eaven was blissfully sane, though she refused to speak of her travels. In the whirlwind of her return - between impromptu training sessions with Killian and reuniting with Lykaios - Eaven found herself engaged to Renhu'ka.

The Royal House of Rannon

"The Dark Jedi are dead. Didn't you hear? Silly bunch of thalldrops caught themselves a case of the sniffles." -Maeve

The bliss was not to last. While exploring locations for she and Ren to hold their wedding, Eaven found herself in battle with a Sith she never learned the name of. The man bested her in combat, and left her for dead.

Which was the state Eaven was in after she had been found and rushed to the nearest med bay. For several minutes, Eaven's heart stopped beating, rendering her, in all essence, dead.

While she was able to be resuscitated, the damage sustained kept the girl in a coma for nearly six months. When she finally came to, it was with complete amnesia. The first thing she saw was Renhu'ka, waiting by her side. Unfortunately, the second thing she saw was Lykaios. Assuming the fearsome, armoured being meant her harm, Eaven fled from the infirmary.

For over a year, Eaven spent her life as Priscilla Respa (the name that was written on her medical identifical bracelet). She knew nothing of the Force, nor her past life. After a few months of simply scrounging for what she could, she was taken in and given a job as a waitress, and the small flat above the diner as a home.

Then, caused by a chance cut across her palm, she discovered the metal of her robotic arms. Exploring these and the multitude of other scars on her small body, Eaven's memories came rushing back.

Hell-bent on reclaiming her old life, the girl spent three straight weeks discovering what had happened in the past year. Most importantly, she discovered the banishment of Force-Users from the Galactic Empire. After more searching, she found her father on the resort planet of Rannon.

Keeping to herself for much of her time within the Royal House, Eaven was drawn out of hiding when tremors of upcoming doom started rumbling through the Force. It was Tom Keagle who finally realised the events threatening to shatter the resort planet as they knew it. Gathering the Squires they could, the pair made their way off-world.

"Here on Ruusan, you'd no sooner find the tooth fairy or boogey man than you would a Dark Jedi." -Maeve

For several months after settling into life on Ruusan, Eaven (newly dubbed as Maeve) had no recollection of the planet that had been left behind. In these same months, she was completely cut off from the Force. Despite this, the young woman was appointed as an Apostle, and took on her first apprentice, a former-Jedi called Exilathor.

Maeve also began harbouring feelings for Lykaios, the man she knew as "Father". It was through the surpression of these feelings that Maeve started experiencing "flashes" of the destruction of Rannon, as well as momentary control over the Force.

Seeking answers, Maeve returned to Rannon, where she discovered that she had been on the surface in the midst of the outbreak of the plague. The chaos around Eaven had sent her into hysterics, pushing her over the brink of sanity. It was Lykaios who had found his daughter, raving mad, and restored her sanity by altering her memory.

Surprisingly, Maeve left Rannon unscathed, with the majority of her memories, as well as her use of the Force, fully restored. Even more surprisingly, she held no ill will toward the Warlord for what he had done.

Retrieved from "https://swrpg.fandom.com/wiki/Maeve?oldid=17188"
Community content is available under CC-BY-SA unless otherwise noted.