The Uhl Turhaya Syndicate no longer exists, please update this page to reflect this.

If you disagree with this, please explain why at Category talk:Details Needed or improve the page and remove the {{details}} tag. 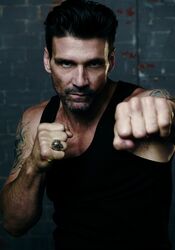 Bojak is middle son of Midys Longstar's three sons and had grown up adoring his father and idolizing his big brother as he tried to mimic him even if it annoyed his elder brother. While he would follow his brother everywhere, he continually tried to learn everything his elder brother did even if he had little to no hope of learning what was being taught due to his own special training and teachings he was receiving at the time. Even though he continually failed at learning what he set out to do the young boy kept his strong drive and worked harder to become more like his brother did until they were both sent away to do some work for the family. To Bojak this was his first chance to prove he could be just like his brother and make their father proud but he failed to realize the skills he was given were so different from both of his brothers that he began to wonder if he was just a failure in his fathers eyes. It wasn't until days before his fathers death that his personal bodyguard opted to reveal that while he was different he was given a set of skills that would be needed to help his brothers in the future which he claimed was to be a secret and told him not to tell any of his cousins that he was traveling with to complete their mission in the outer rim. The bodyguard kept up this lie until word reach him that the family had run into problems and seemed to be falling apart. This was what the cowardly man had been waiting for the entire time as he then used that as a way to sell everything and kill all those that believed him to be their friend. As the family slept the bodyguard went about killing anyone that wasn’t willing to go along with his plan to sell everything, but when it came to kill Bojak the man began to have second thoughts as he couldn’t kill the child he had watched over for so many years but he couldn’t allow him to return to the syndicate and reveal what truly happened to all of the family and their assets. The bodyguard then decided to sell the young 15 year old child into slavery saying he had found him and didn’t have any use for him.

While some could see Bojak’s luck as both horrific, it seemed to be his saving grace as the hutt known as Teeba purchased him to use as a fighter to help bring some quick income by training him and throwing him against the local underground champion. While many didn’t see him as being of any true value for such an endeavor due to his lack of combat experience, the hutt seemed to know something and fed him surprisingly well and put him through the most horrific training he could as to prepare him for the true tasks that would lie ahead as both a gladiator possibly an enforcer if he could be molded properly.

As time continued to pass the hutt crime lord Teeba had changed the skinny and mouthy teenage into a muscle bound monster and threw him into a fight against his rival’s best…a fight he assumed the young man would lose and bring him a rather large profit. Unfortunately for Teeba, but then again fortunate for Bojak, it seemed that the monster that was forged from the boy known as Bojak wasn’t about to be stripped of his life and chance at revenge as he erupted like a volcano and made quick work of his foe displaying surprising speed and grace for someone as massive and strong as he had become. This victory would only prove more costly in a sense though as the hutt had lost everything on that fight and was forced to sell him to a hideously scarred, overweight, and arrogant human.

Life in the Pit

The hideous man that purchased the young fighter was a local crime lord and warlord known as Scoot and while Teeba had a lot of anger about losing everything he did his best to keep his prized fighter from being sent to such a place as rumors had always swirled around about how horrible The Pit truly was but it came down to the highest bidder and only Scoot could pay enough to clear the Hutts debt. It was thanks to his time with Teeba that he was given additional training in the skills required to make him an enforcer and it was due to this that rival's of Scoot gave the mans 'pet' the nickname Demon as he was unnatural in many ways. It wouldn't be until Bojak turned 20 (3 years in slavery to the Warlord known as Scoot) that he began to turn violent and started killing the warlords best guards and was thus thrown into a cage and treated like an animal as a form of punishment, but while the warlord had sought to break the demon he seemed to only fail as the man turned even darker and more dangerous to keep and required several guards to keep him in line. While this seemed to have one of the opposite effects that Scoot had wanted it also presented a way to use him to make him rich as he played on Bojak's thirst for freedom as away to tell him if he continued to win in the arena and become the champion of the Pit he would be set free. This would become the mans only drive as he would continue to fight and survive week after week, slaying several of the so called best to ever fight in the arena known as the Pit until he faced his final foe and after a long and hard fought battle, won the fight only to be stripped of his promised freedom until a lovely young woman rescued him from his prison.

Service to the Bleak Blade Syndicate

While Bojak's older brother and little brother look alot alike and take after their father in many ways, Bojak took his appearance from his mothers side of the family that many of the men had blonde hair, stocky build, larger body, and completely solid even when they appear to be overweight.

Just like his elder brother Vinnie, Bojak has several tattoos that symbolize his past and his current life. It is an ever growing collection and only one artist as ever been aloud to give him one of these marks...an elderly man from Coruscant named Dekan.

Thanks to his time fighting in the illegal underground arena's he has become an experienced knife fighter.

Bojak has had extensive training in high caliber weapons although he favors his .48 Enforcer the most of all these.

The rise and fall of Bleak Blade

Out of Character About the Roleplayer

I am a Staff Sergeant in the US Army that is called Heretic by many of my comrades in arms after OIF 1 where a member of the Son's of Iraq called me that. Since then I have continued my military service and am on my 4th tour overseas.