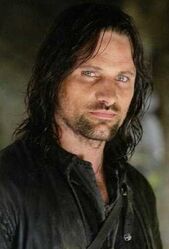 Judah was born on Telos IV and was the first of his genealogy to be Force Sensitive. He always felt as if this was a lesson for his parents who did not believe in The Force, and believed all who claimed to be Force users as cheap parlor magicians. Despite his abilities, his parents still would not accept the truth. He was mistreated by his parents for being "different" and eventually ran away at the age of 14.

Judah got involved with a local crime syndicate known as The Order, under the leadership of a man who simply went by the name Dothan. The Order quickly recognized his abilities could be very useful to them. He quickly worked his way up the ranks and was eventually given management of operations in the Capital Section. His abilities to persuade those who were weaker minded, and to sense when things would happen made him very successful and wealthy.

Once Judah gained enough credits to purchase his own ship and leave Telos IV he did. The young adult acquired a YT-2000 and named it Morning Star, in hopes the ship was way to a new life which did not involve crime.  Leaving the crime organization cost him more than the credits to purchase a ship. Dothan took his anger out on Judah's father KeRon, shooting him in the back of the head execution style.  It would be four years before Judah would learn of the murder and begin a series of events to see the man responsible

Despite Judah's desire to change however, he found himself returning to a life of crime. He had no way of surviving and resorted to con jobs and Sabacc. Without having anyone skimming a price off the top of his earnings his wealth grew pretty fast. Judah found with that kind of money coming his way at such a young age there was no reason to stop. He had everything he wanted, as far as he knew any way.

While Judah was on Corellia his accounts were frozen and he knew he needed some credits in hand to get off the planet and settle his tab. He marked a recently widowed woman who had just inherited her deceased husband's fortune. She was curious in gambling and was easily enticed into a match. Judah easily took her credits match after match. Thinking luck would have to fall her way the widow bet every credit she had with her, and Judah took it all.

The match had been observed by a Jedi who seemed to be aware there was more to Judah than being a lucky card shark. He approached Judah and played one round with him. The stipulation was that Judah put all the credits he won on the table. Judah thought he could beat the Jedi like everyone else so he agreed to the winner take all match. The Jedi worked Judah over the way Judah had done to so many people before, and after winning the match requested Judah to follow him.

Judah agreed to follow the Jedi and watched in utter amazement as the Jedi returned the credits to the widow who had been sulking at the bar. The Jedi then turned to Judah and told him his tab had been settled. Judah was overwhelmed. No one had ever shown him such compassion before, and Judah was determined to change. The Jedi left Judah with instructions to go to Yavin VIII and seek out the Jedi. Judah was told he would find the answers he sought there.

KeRon , Judah's father, was the son of a merchant. Being a business man is all he knows. He never took time for his children, which made them bitter. He is very tight fisted with the credits. Judah looks the most like his father, and his father's side of the family. The dark hair, the long legs, and the broad shoulders, all come from his father.

Ellona , Judah's mother, was always a beauty. No one could ever figure out how KeRon was able to attract such a beauty. She was always kind, but always favored Joti because of Judah's abilities. She always blamed herself for the fact that Judah ran away, and hopes to one day see him again. Judah's chin came from his mother. The cleft chin obviously is a trait which came from her side of the family. She also claims Judah's brown eyes came from her as well.

Joti, Judah's brother, is a spoiled brat. He always managed to get what he wanted even when he misbehaved. Despite that Judah and Joti were always very close. They look like they could be twin brothers, however Judah is older by 14 months.

Katara Starkos: Friends with benefits, crime fighting partners, and parents. Katara is the mother of Sasha and a fiery Corellisi with red hair and blue eyes. Judah knows the two should be together as a couple for their daughter, but beyond that, because Judah knows they are perfect for each other.

My character gained the rank of Jedi Apprentice on [insert link to promotion thread here]. My character was trained in the following force skills and abilities:

My character achieved the rank of Jedi Knight on [insert link to promotion thread here]. My character was trained in the following force skills and abilities:

I Can't See, yet I Can See (Judah's second full hopeful interview)

Family Reunion (Judah is reunited with his brother, meets Ka'ra Tracyn, and learns his father is dead)

Friends With a Tree (Judah and Nafrayo at the Tavern)

It Happened on the Way Home (Judah meets Shyahwyn)

Taking the Long Way (Judah is promoted to Apprentice)

You Remind Me of Myself (Judah meets Antony Icarus)

Holocrons, Books, Scrolls and More (Judah and Keeva look into the cave drawings they found)

Shh! This is a Library (Judah meets Ala)

Fortress of the Mind (Mind Shields with Nafrayo)

Arbra or Bust (Judah and Keeva look for a Library)

Commiting to the Cause (Judah meets Evelynn Casey)

A Change for the Better (Judah meets Kalen Windson)

Revisiting the Past (Judah helps Kalen)

We Are Who We Are (Token Waters returns)

The Way Things Must Be (Judah and Satkia deal with temptation)

Fancy Meeting You Here (Judah, Greta, and Talitha run into each other at the hot spring)

Hapes Ball (Judah tells Keeva he has feelings for her)

The Party Planet (Judah and Aizen catch up)

Facing the Feelings Inside (Judah and Keeva get together)

Learning to Let You Soar

Dathomir: Aurek What Does Your Sense Say?

Let's Get It Over With

What Was Lost, Now Made New

Broken and Fixed (Ayko and Nalia)

Into the Woods (Desiree)

Roses are Red. Jedi are Blue. (Judah/Katara- Their first meeting, and working together as crime fighters)

Wake up Judah Lesan! (Judah/Kat-Judah awakes from his coma to find out he has a daughter.)

R.E.H.A.B. Spells Tension (Judah/Kat -Red helps Judah with the Jedi's physical rehab after he awakes from his coma.)

11 a Day Plus 1 Makes a Dozen (Judah and Katara go on their first official date.)

Here you can tell us a little about yourself and your inspirations for Roleplaying.

Here you can link and list all of the characters you roleplay.

Retrieved from "https://swrpg.fandom.com/wiki/Lesan,_Judah?oldid=37296"
Community content is available under CC-BY-SA unless otherwise noted.