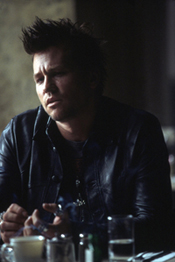 Ket Van-Derveld was the third son of self-proclaimed merchant trader – and smuggler – Diego Van-Derveld and a concubine still unnamed on the desert world of Tatooine. Ket himself never knew his father until much later in life. From birth until the age of 9, Ket lived a simple, albiet poor life, with his baby brother Cat, and their mother and step-father in Mos Eisley. One night, the Hutt know as Dar'shok had sent a few low-level enforcers to rough up their step-father over some sort of deal gone wrong. Their step-father however, had other ideas, and in the ensuing fight, he was killed, and while Ket had been trying to protect Cat, he was taken to be sold as a slave. From the age of 9, he had begun to train in private during his downtime, seeking out as much knowledge in the martial arts as he could possibly learn. He would soak up the fights like a sponge, using his natural ability to mimic and perfect every movement he saw. At age 12, he was allowed his first fight, winning in spectacular fashion. Becoming something of a name in the fighting circles of the Outer Rim, in his 11th fight at age 18, he won his own freedom. Spending what creds he had saved up, he traveled to the Smuggler's Moon of Nar Shadaa, seeking to earn more creds as a famous holo-vid fighter. It was here that he first met Satkia Beltrak and her sister, Sarya, the former becoming his closest friend. After about 5 years (aged 23), Ket would be coming up upon his 22nd fight. The night before, however, he was approached by a group of Trandoshian mercs, and was informed should he fight, let alone win, Satkia would not see the light of the new day. During that evening's camaraderie at one of the many bars in the section they lived, Ket would cause a bar-room brawl, and in the ensuing struggle, seemingly die on the floor. In reality, Ket had faked his own death, as he did not want any harm to come to Satkia, and knew that as long as she was near him, she would forever be in peril. It was on that night that the seeds of darkness that became Darth Ahroun were planted...

The Jedi of old were known throughout the universe, and it was here in the GJO that Ket sought to learn the ways of the Force, to protect those whom had no real way of doing so themselves. He was taken under the wing of Jedi Knight Liam Jinn, to begin his training as a Padawan of the Jedi. During this time, Ket would realize early on that the Force had brought him here, not to become a Jedi, but to show him what he was never to become. Forsaking what he viewed as flawed, incomplete teachings, he would leave this place, searching out those whom he had heard of in hushed whispers among older students, those whom embraced the hatred and anger, whom wielded insurmountable power: The Sith Empire.

Ket had ventured to the world of Munto Codru. Once there, he was greeted in the Great Hall of the Sith by Ogre Mal Pannis, Dalethria and Rama Sha. Oddly enough, they did not try to gut him on the spot, as his former ally Liam Jinn suggested they would. Instead, they let him speak his mind, and say his peace. He told them of his life, and his time with the Jedi. As he did, in a futile attempt, the Jedi Liam Jinn and Seosamain Cavanaugh had followed him, and burst into the chamber! It was a bit of a shock, and Rama Sha, in a very angered state, disposed of them from the halls of the Sith after a futile attempt to try to convince Ket he was making the wrong decision. Little did anyone know, Ket had started to lose control of himself, and Ahroun had been born.

After being indoctrinated into the ranks, Ket began training under Ogre, working with a sort of tunnel-vision toward his ultimate goals. It was during this time he would first meet his biological older brother, Vega Van-Derveld.

Ket has a multitude of tattoos covering his entire torso, as well as decorative tattoos along his arms as seen here.

Jedi (2011 - ) Ket is currently being trained by Amalia Braska

The 'Of Wolf and Man' Saga:

Retrieved from "https://swrpg.fandom.com/wiki/Ket_Van-Derveld?oldid=24720"
Community content is available under CC-BY-SA unless otherwise noted.