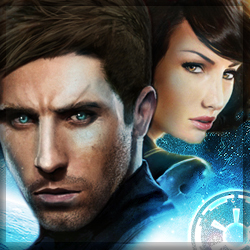 "Concentration, focus, long-term thinking—those are the qualities that separate a warrior from a mere flailing fighter"
- Aram Kalast

To look upon the young man who is Aram Kalast is to understand why he is, what he is. From the tips of his brown rough, yet sophisticated hair on his head to the tips of his highly polished Imperial Officer boots he is one hundred and fifty percent a military ‘brat as they would say.

Standing at a little under six feet the strongly, yet somewhat lithe built human male isn’t the most imposing sight that people have seen upon the command decks of the Imperial Star Destroyers that have flown the Galaxy, but it is exactly this that makes him so dangerous. Young and athletic the twenty five year old is in peak health, his body showing it with well toned muscle and chiselled features, many have seen within him their son or their brother who is off somewhere in the galaxy while many others compare him with the most charming of rogues. It is a common thought that if he had not been plucked for the Imperial War Machine Aram would have probably ended up at some club somewhere smoothing over the ladies with his looks. His most defining feature many would argue are his eyes, the deep blue that settles within them is the only betrayal to his near human heritage, if it can be called such a thing. With the linage of Chiss blood that runs through his veins it is said that during times of great stress or emotional impulse Aram’s eyes glow a slight but eerie blue. Such claims are knocked as nonsense by senior officers and the general public, claiming it as just a trick of the light; but there is no doubting that at times his eyes glisten with an inner light that creates a rather soothing; or terrifying experience for those who witness it.

Usually clad in what the Imperials call the ‘Uniform’ Aram makes it look near fashionable, the crisp cut black cloth made to resemble that of the more elegant styling of the Chiss Ascendency rather than the normal Imperial officer garb. Upon his left shoulder lies a red pauldron the plait and braid that runs down and around his torso joined by another yellow one mid-stretch. While the effect is lost on most of those who see him, for those who remember the old days of Palpatine's Empire or have set foot upon the home system of the Chiss they will recognise it as the highest military honour available for a Naval soldier. It symbolises bravery, courage and initiative in the face of dire odds, a reward the young man was awarded shortly before his return to Imperial Space.

Refusing to wear the traditional cap of the Imperial Forces Aram breaks slight protocol, yet those who see him care not, for his battle prowess is more than capable of living up to his appearance. It has been noted on occasion that Aram has donned the white uniform of the Grand Admirals, this however was not an indication of rank and seen more as a tactical move made to dishearten the opponent.

Cold, crisp and calculating...They are but some of the traits that are spoken in hushed whispers about Aram Kalast, yet while true they are far from all of them. Each person who has personally met him will each tell you the same key factors of his personality, only a few will tell you the more personal ones. Being raised from a young boy to be part of a military is enough to carve a rather stoic and straight faced personality out of anyone, but to personally carve him to one ideal before switching to another adds a whole new level of personality shifts beneath his head.

Professionally Aram Kalast is a tactician and his personality shows it, quiet and observant the young Imperial Officer would rather sit back and let matters unfold before analysing the situation so he can end it to his advantage in one quick yet well planned motion. This discipline goes right down to his every day conversation where many people say he is cold towards them, simply not understanding that it is him merely reading their every word and move so that he can speak with the best intentions at heart, and it works every time.

For those who have seen Aram enter an argument it is a revelling experience, watching him as he silently watches from the side before standing, making a single point and watching with a grin as both parties stumble over their words trying to rectify the suddenly and painfully collapsing situation.

On the battlefields and tactical rooms of the Empire this is taken to a whole new extreme. When Admiral Thrawn was overthrown people said that they lost the greatest technical minded person in the galaxy, they had been correct, at least until Aram Kalast came of age. He can read strategy as if his enemy was on the comm telling him what they are about to do next, always playing seven moves ahead of the current play. While it has never been widely shown to the New Republic, Aram’s tactics have crushed countless opposition on countless fields of battle around the Outer-rim territories and the Unknown Regions. His bold moves, seemingly random shifts of formation and will to use technology in ways it simply wasn’t meant for has caused a slice of fear to be felt when his name is mentioned around the military training yards of the galaxy. Of course so far his efforts have been limited to his operational area in the outer rim, the NR spared his tactical genius.

Within Aram’s head lies the biggest threat to the galaxy at large, while content with letting the people live their lives in peace he is less concerned with running an established government as he is with utterly destroying the ‘Rebel Alliance’. Although he himself has not been announced to his arch nemesis his hatred is burning strong and he is willing to do anything, even a repeat of the Clone Wars to gain his ultimate goal of their destruction.

He is an avid lover of anything that has basis within the arts. From creative writing to sculptures Aram will collect and study each and every piece that he can find. To him, like to Thrawn before him and most of the Chiss race that he has studied with art is a way into the mind of its creator, it gives insight into their inner most thoughts and dreams. With the proper ideals and thoughts one can use this information against the creator, a tactic that Aram is quick to take advantage of, his mind usually retreating into his private command room where he and he alone can sit and ponder the arts of the galaxy.

The biggest belief in Aram comes from those who have lived closely within Imperial Rule over its reign yet were never true followers, his artful thinking and idealistic approach, while outright dangerous for his enemies is a breath of fresh air for those with visions of the future. As the next generation of the Empire’s finest Aram Kalast’s open and accepting behaviour, based upon the honour and respect of his upbringing may show promise of a new change and era to the Empire, one that will once again see the Galaxy wilfully under it’s banner.

The child who would eventually become Aram Kalast began his life late in the years of the Civil War, not as many believed upon a world of Imperial rule, but in fact within the tender hold of a fully pledged Rebellion supporting world.

Tiisheraan, a planet famed for its politician’s was the home to many an influential noble family, and even more loyal and brave supporters of the Rebel Alliance, examples of such families were the Tyrilus, a noble house that openly rebelled against the Imperial hold within an asteroid field outside of Tiisheraan’s system; the Burikels, a family of musicians and poets who inspired thousands of normal folk in the galaxy to see the ‘dark’ side of the Empire and the Juriiso House.

It was the Jurisso house where the fable of Aram’s early life began, and it was within this house that his true family ruled, in all their anti-empire glory.

Born Michael Jurisso to loving parents Alpaci Jurisso and Louisa Jurisso the young noble was raised amidst a world of political intrigue and constant whisperings of greater things, it is believed among those who know of Aram’s true beginnings that it was from an early age that his father, a Rebel Alliance General, began teaching the young Michael tactics and warfare in the hope that if he didn’t see the end of the Empire, his son would become the perfect replacement to do so.

Michael was sent to one of the best schools that the planet could offer sitting alongside other students who would become much more than your average Joe, such as Lifuri Delost, who as an eighteen year old would become the galaxy record holder for long shooting at the New Republic Military Academy, Hulst Elrigod; captain of the Concord Flight, the largest flotilla of civilian based craft in the galaxy and Daine Saria; current Chief or State of the New Republic.

The turning point to this Rebellion loving history?

Michael’s seeming murder along with his parents after their bodies were found shot up in their Tiisheraan apartment, the boy was declared dead at the age of eleven, his body buried with his parents in the Jurisso House cemetery.

Return to the EmpireEdit

The first official recording of Aram Kalast; at the age of thirteen entered as a member of the Imperial Youth System as the orphaned child of Derik Kalast and Amint Deelea on Bastion.

At the age of sixteen Aram was enlisted into the Imperial Academy and would remain there for the next three years.

Aram Kalast was never officially given the rank of recruit.

Upon graduation from the Imperial Academy, Aram was granted the rank of Corporal.

A mere three weeks after leaving the Imperial Academy Aram was promoted to Lieutenant becoming the youngest ever at the age of nineteen.

Aram was promoted to Captain shortly after his return from the Chiss Ascendancy. He was twenty two when granted the honour.

Aram was never granted the rank of Commander

Shortly after Aram's revealance of the attempted coup against the Imperial Council he was granted the rank of Admiral; at twenty five he was the youngest ever to sit in the position of Supreme Commander.

Retrieved from "https://swrpg.fandom.com/wiki/Kalast,_Aram?oldid=35436"
Community content is available under CC-BY-SA unless otherwise noted.