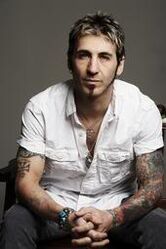 Alister was born on the agriworld of Agamar where he lived with his father Drailin Kaid, mother Aedal, and little sister Yuula. Coming from a lower income household Alister's family never possessed much money, though his home was rich in love and attention. Drailin provided for his family as a hunter by selling the skins, meat, and other valuable parts from local wildlife, while his wife Aedal stayed home caring for the family. Attending local school Alister was an athletic child who not only enjoyed sports, but spent most of his free time either dashing through the woods, or helping his father hunt. He showed considerable skill with a blaster pistol at an early age, and then a blaster rifle when he was old enough to handle one properly. He spent as many afternoons helping his father hunt and trap local game as he did playing with his friends, with an upbeat and cheerful personality Alister socialized easily and not only made a lot of friends, but when he grew older he had little problem attracting beings of the opposite gender. He has on several occasions bragged about having girlfriends from a number of different species including Falleen, and Bothan among others.

Drailin was a strict and imposing father with a rigid sense of right and wrong, he would discipline his children strictly, but was also a fair man who listened to his family and valued their ideas an opinions. Aedal was a very gentle and soft spoken woman, slight of build and stature she always had a laugh and a hug for her friends and family. Between the two Alister grew up in a very happy home caring greatly for his family. He was also known among his friends for being very mischevious, often times getting into trouble, though it was never anything that brought him into conflict with local security forces beyond having them call his parents, followed by a scolding and possible grounding. Earning his certificate of completion from school at eighteen Alister chose to follow in his father's footsteps, he remained at home from the age of eighteen to twenty-two. The decision to remain at home came from a drought that struck Agamar, with local wildlife thinning out and things becoming difficult for Drailin, Alister helped his father hunt and even took a full time job with local security forces to help bring more money into the household.

As a member of local security forces Alister proved to be quite skilled in his profession, not only was he able to take beings down from a considerable distance with stun bolts, he showed what seemed to be a natural skill for hand to hand combat. One night, after having traded a shift of help a friend, Alister encountered a young Twi'lek woman named Ree'una who was being beaten for angering her master. Having accidentally broken a priceless vase owned by the wealthy merchant the beating soon turned into a vicious assault, Alister who had been watching and controlling his own urge to hammer the man with the butt of his blaster rifle, moved to intervene. Before he was able to reach them the merchant drew a blaster pistol pointing it at Ree'una's head, when Alister yelled for him to stop, leveling his rifle, with surprising speed the man turned firing off a shot that struck him in the shoulder. Angered by the attack and filled with pain from the wound, Alister returned fire cutting the man down with a trio of blaster bolts to the chest. He was eventually cleared of any wrong doing and the shooting was ruled justified.

With her master dead, no money, and no place to go, Ree'una was welcomed into the Kaid home. Initially the agreement was to allow her to stay there until she was able to find a place to go. As she spent more and more time with Alister, the two quickly fell in love with one another sharing a very passionate physical and emotional relationship. Once the drought on Agamar ended the two moved out together, in their own home Alister and Ree'una began living a quiet and happy life together even discussing the idea of getting married. A year and a half later the discussion became fact and the two were married in a small, private ceremony among friends and family. Even though they couldn't have children, the new couple continued to live together as man and wife enjoying a simple life. For the next three years they lived together until one day when his town was attack by an upstart criminal organization calling themselves the 'Obsidian Talon'.

The ensuing battle against the Obsidian Talon was violent and bloody, costing the lives of a numberous people in town, but eventually Alister and the other local security forces were able to route the criminal organization and drive them from Agamar. What no one realized at the time was that a number of Obsidian Talon members had managed to infiltrate the town during the retreat, intent of causing as much damage as possible in retaliation for being driven from the planet. Using a variety of explosives the remaining criminals began to attack a number of homes and businesses in town, one of those being the home of Alister's parents. Having been out back securing the storage shed after making sure nothing was stolen or damaged, Alister witnessed an explosion caused by a thermal detonater that killed his entire family. Unable to handle the death of his family he lost his job, began drinking heavily, and began falling into a downward emotional spiral.

One of the few things that managed to keep Alister from completely losing his mind was his wife Ree'una, but even she couldn't heal the emotional wounds that plagued her husband who continued to grow distant. Eventually Alister told Ree'una that he was leaving for a time to try and get his mind right again, but promised to return. Seeking the help of the Jedi on Yavin 8 was actually the idea of a friend of Alister's that piloted a cargo freighter, prior to that he had considered simply going to a psychologist and trying to get his life back on track before he ruined what little he had left.

Alister only recently became a Jedi Padawan, he is currently studying Jedi philosophies and learning the very basics of the order.

I've been role playing for over 15 years in a wide variety of forms, IRC, table top, and forum based. I enjoy reading a wide variety of things, mostly fantasy, sci-fi, and fiction. I also write a lot, mostly forum based stories and fan fictions. I plan to go to college and pursue a professional writing career as well.

Retrieved from "https://swrpg.fandom.com/wiki/Kaid,_Alister?oldid=21822"
Community content is available under CC-BY-SA unless otherwise noted.