View source
watch 01:36
We're Getting Mutants in the MCU - The Loop
Do you like this video?
Play Sound
Terra Drakontas 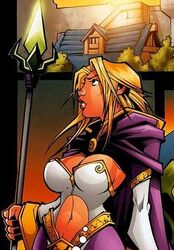 Prior to Joining the Jedi

Once a primitive planet that was in a medieval period of development, in 16 BBV, Azuregos was colonized by Galactic Empire and used as local base of operations in conjunction with neighboring world Azure I. Despite the castle like structures that once dotted the country sides, the planet quickly became a training ground for officers and soldiers due to the lush forests that surrounded the planets. The original population of the planet was stretched in to the hills and country sides away from the freshwater and in to areas with low resources. As a result, Refugee Camps were set up all over the planet in order to try and stabilize the population.

Terranemia Drakontas was born shortly before the Battle of Yavin, an older twin sister to her brother Terranigma the Fourth. Both were born to a prestigious line of ruling family on the planet that had ruled the planet prior to its colonization by the Empire, and expected to lead their people should they ever get the chance to. Thankfully, their Father and Mother, Terranigma the Third and Verdena, had been gaining supplies and understanding the nature of the new technology that was otherwise common around the universe. Desperate to regain the country and planet from the Empire, the family hid underground and became freedom fighters for their country, rallying those to their cause until the whole of the planet knew of the attempt to retake the planet.

Shortly after the battle of Yavin, the Empire lost interest in the planet and moved to Azure I, leaving behind only a small task to guard the planet. With the lack of proper men to guard the planet and assistance of those who turned their back on the Empire, the Empire was over run in a matter of days and control of the planet was returned to its native population. With their new found technology, the planet quickly returned to what it was before, but had begun to evolve technologically faster than most civilizations would. With the Empire’s technology and now knowledge that there was more to their world than just what was on it, Terranigma this Third set up the first major governing body for the planet, being elected to King of his planet for this work. He led a rebuilding to modernize those who would want to and offer assistance to everyone they could.

Despite the humble and decrepit beginnings, Terranemia, Terra to all those who knew her, became the very model of an aristocrat. The Drakontas were proclaimed the first Royal Family of the planet and elevated to a new level. Despite the status, Terra offered assistance to everyone she could and worked hard as a child. By the time she was only ten years of age, Terra knew the history of her planet better than anyone, and knew more about the technology of the universe as well, having studied with those who came from the Empire originally and new found allies in the Rebels who used their planet as a base for hiding since her promotion to princess.

Outside of her normal princess and family duties, Terra appeared cold to those around her, seemingly more interested in studies and her appearance as a Princess. Though she enjoyed normal things found on the planet, there was a sense of honor and duty that had been resolved inside her, which made her want to support and prop up the planet in whatever way she could. However, she secretly felt there was more for her than what the family could provide and more so than she could for the planet, feeling there was something more. Slowly, Terra began developing ability to hear whispers in the wind, see some things that were coming up, and even could lift up a few pieces of string with ease without ever touching them. It wouldn’t be till much later that she learned that this ability was known as the Force, a distant and unusual skill that would one day develop in to something grand if she were taught.

Seeking training and believing the best thing she could do for the planet was have some form of representation in the universe, Terra agreed to vacate her right to the throne in order to represent Azuregos in the universe, leaving the seat up to her younger twin brother in the process. Upon leaving the planet, Terra made arrangements to learn how to use the Force so that she could possibly become a better representative of her people, and maybe return as a even better person worthy to lead her people.

Life as a Padawan

Terra is of Average Human characteristic, possessing moderate athletic abilities often seen in someone trained in dance or theatre. Her hair is left long and in a gold blonde shine, often left loose and hanging around the sides of her face and bangs in front. Her eyes are often considered cold looking, though the blue look to them is merely her demeanor. Her bust is considered above average, often left in loose flowing clothing as to not be constricted at all.

Terra is often seen in older looking silk clothing, consisting primarily of robes or layers of robes over her body. She is often seen in her white & purple dress, with matching purple cloak draped over her shoulders and back, which is made of the highest quality.

Despite the previous Life as a princess, Terra is readily willing and abled person who can be depended upon when necessary. Though perhaps unwilling at times to get her hands dirty or participate in activities that might have been deemed unbecoming of her, she puts such pretenses behind her and moves forward despite her feelings. While indeed good natured and willing for the best, Terra is goal oriented and finds herself trying to become an ideal version of what she sees herself as being. This had let to Terra being picky and sometimes passionate about her goals and beliefs, to the point in some cases of being offensive to others.

Because of her upbringing once her family was made rulers once again, Terra is often seen as a model of aristocrat life, often moving and performing motions precisely as a lady should. Her speech is more than often direct but flattering as well, and can be considered arrogant at time. The tone she speaks in makes it definite that she was royalty of some sort, never speaking in slang or with conjuctions, and often with long words when a shorter one would do.

Part of Terra is torn between following something for herself, but also wanting to focus on her people. She believe they are the most important thing in her life, and less so herself, but wonders what would it be like if she were focus on a dream or sorts on her own. Part of the journey to become a Jedi is that reason.

One failing of Terra's is that she is unfamiliar with the Galaxy as a whole, and what customes and concerns others may have. This had led to appearences of ignorance or confusion when dealing with some cultures, which Terra finds a fault of her own.

If anything, Terra's major fault is her own belief is that she herself has to be the ideal version of what she herself sees herself being. This becomes an issue when she does something wrong or fails to do something, she second guesses herself or berates herself despite the obvious flaw that she is still learning. She is prone to insecurities about her own abilities, second guessing herself and questioning the nature of thing, or atleast over thinking them when unnecessary. The Force, for example, is one she questions on a daily basis: unable to believe in completely, but unable to excuse its existance entirely, Terra feeling the ideal of spiritualism or religion to be a false choice or ideal. This leads her to believe in the Force not so much as a cosmic energy, but simply as a energy that people posess, not believing in it's connectivity to others.

Terranemia Drakontas was trained by Amalia Braska. She was trained in the following force skills and abilities:

Terranemia Drakontas gained the rank of Jedi Apprentice on 8-14-11[1]. She was trained in the following force skills and abilities:

As a Padawan: The Princess Arrives

The Basics of Light Sticks

Princess and the President