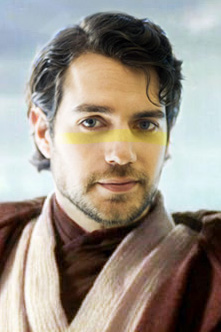 Orphaned at an early age, under circumstances he has yet to fully understand, Demitri was adopted by the Drahmin family of Coruscant. Seemingly unable to have a child of their own, Lesio and Mira Drahmin raised the boy as if he was their flesh and blood, and later - to all their surprise - gave him a younger sister by the name of Zoria. The late Mira Drahmin worked within the Republic Senate. Lesio Drahmin owns a restaraunt on Coruscant. Like her older brother before her, Zoria is a student of the University of Coruscant, where she studies at the Coruscant School of Music.

As part of his pledge to the Jedi path, Demitri abandoned all contact with his family during training and was only briefly reunited with the Drahmin's when called to his mothers death-bed to hear the truth of his parentage. Since then, he has not spoken to his father or sister, resuming his self-imposed exile from their lives in order to maintain his focus on the Force.

As a Jedi, Demitri takes many cues from the late Master Obi-Wan Kenobi. He endeavours to walk the path of the old Jedi Order who placed such importance on being steadfast, selfless, and modest. Perhaps as a consequence of this, Demitri has few close friends and has even distanced himself completely from his family, to the point where he no longer feels emotionally bound to them. His commitment is to, above all things, understanding the Force and the Galaxy.

Specialisation in the Force Edit

Demitri has developed a particular affinity for those Force Powers which revolve around sight and visions, e.g.

He has also recently begun to study the fabled flow-walking technique, though has yet to attempt any use of this skill himself.

Demitri is primarily a user of Makashi. He favors Form II for its elegance and precision, and in-keeping with its style he wields a lightsaber with a curved-hilt. As he follows the path of the Consular, he rarely chooses to enter combat – though his understanding of combat techniques is nonetheless quite rigorous. Believing the best offence is a good defence, he has studied the armed and unarmed techniques of many martial arts, allowing him to incorporate some unorthodox blade-work into his repertoire.

Past and present apprentices:

Here is a small selection of threads featuring Demitri:

You can call me Jen, Vegs, Wofl... whatever.

Retrieved from "https://swrpg.fandom.com/wiki/Drahmin,_Demitri?oldid=13566"
Community content is available under CC-BY-SA unless otherwise noted.