The SWRPG Wiki
Register
Don't have an account?
Sign In
Advertisement
in: Characters, TSE Members, The Sith Empire, Sith Knights 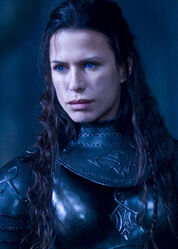 Ragna Malreaux was the youger sister of the Viscount Malreaux. Though she used to be close to her brother, especially interested in his research and manipulations concerning Midi-Chlorians, she grew more distant of him when moving from Vjun to the Drogheda Citadel due to her marriage to Herak Di Scarra. Herak was one of the closest counselor to the Queen of the world, and even if offered a position at the Queen's service as well, Ragna decided upon it and was glad to just spend her life in their quarters, reading about her brother's experiments and other data that could develop her knowledge about poisons and alchemy as those subjects captivated her.

When the serious issues and combats on her homeland began, Ragna didn't care about it, even when it concerned her own brother and sister in law. She only heard that their son was sent to the Jedi, but it didn't really catch her attention. Ragna and Herak had two children: Haron and Alice. Both were raised at the court, and versed into intrigues as from a very young age. Though they were close, there had always been a sense of rivalry between them that was enhanced by the great talent and passion they both had for fencing. They were found almost every evening dueling in one of the old rooms in an ancient tower of the castle, until they were both too exhausted to do anything more. That was what actually caught Haron's tragic death when he was killed by Alice when they were seventeen and fourteen. The teenage boy didn't manage to parry a strike coming from his younger sister, and the wound was fatal to him.

When the Drogheda Civil War started, Ragna and her teenage daughter Alice flew back to their homeland. Given that Ragna didn't have that much love left for her husband, she didn't even shed a tear when learning that he had been killed during the conflict, since she had more important matters to settle. At the name of Malreaux many were ready to start the fight again when alerted that heiresses to the Viscountess titles were coming back. Yet, after the few years that had passed and the rest of the family dead for good, the territories were a mess, and Ragna's strong hand of steel was almost a blessing for matters to be settled down and the land to come back to its former glory.

When Alice was seventeen, her mother decided that it was time that she got married, especially as she was aware that a solid union, installing a future Viscount would do good to start that renewed era of their family's glory. Of course Alice wasn't at all inclined to abide by such motherly wishes. It wasn't so much that the young brunette was shy or prude, but she wasn't the kind to settle down and she believed that a woman could as well do the job without having to go by the patriarchal idiotic habit of marriage. Nevertheless, she agreed to be matched with someone. The first fiancé she was offered was Arih Menetero, a noble of a neighbor land. Yet the young man knew a sad early death, as he died three days after his official engagement to Alice. He passed away due to a strange disease that then killed some of his servants. Nobody ever knew where it came from.

Despite her mother's tries, Alice didn't agree upon an other fiancé until she was twenty year old and now officially holding the title of Viscountess, when she actually fell in love with Ilia Karatesh, an entrepreneur from the Inner Rim, in botanic exportation. His passion and knowledge in flora intrigued Alice to the greatest point, and both were known to discuss plants and alchemy till the early hours of the morning. They both shared a very dry humor and enjoyment for knives that weren't without disturbing a few close servants in the house when stumbling upon them at inappropriate moments. With all that Ilia taught her about botanic, it only made her improve and experiment even more when it came to poison and related matters. Yet, one day her husband found out about it and highly disapprove of Alice's practices. Utterly upset about someone even trying to make her change her mind and despite her feelings for him, her peace of mind was the most important. That was the reason why a private event turned out badly, with Ilia killed by a 'lost knife' used by his wife. Grand funerals were organized and Alice mourned his death nevertheless, losing herself in the unmerciful ruling of her lands, and her hidden experiments. If her mother was aware of that, she highly encouraged them, even if she had begun to understand that her daughter was someone whose will couldn't be bent. Alice's financial situation was also improved since she inherited her late husband's society, and so could have amazing botanical resources at hand.

When reaching her late twenties, the Viscountess Alice had made her territories prosper. People obeyed her orders with no question, both due to respect - because she had made them all richer - and to absolute fear. Executions were usual, and were even the cleanest way of Alice's men to handle any incident that would disturb her highness. During one of her journeys abroad, even if she often stayed on her home world, Alice met Orkhan Heramey, a young man who courted her and despite the rumors about how deadly the woman could be given all the deaths around her, he proposed, and she agreed, which surprised anyone. Alice had a liking for the pretty boy and he wasn't much of a bother. Yet, the union didn't last long, as the woman got tired of Orkhan within the next year, and he accidentally died of 'food poisoning'.

One of the greatest prides of her family had been their collection of Sith Artifacts that had been gathered from various places of Sith Space given that their home world was part of it as well. Having read and studied many of the archives that were safely kept at her fortress, Alice had developed a particular interest in the Sith history and powers, and had been pondering about a journey to their current home world for a while.

From there, Alice was officially accepted in the Sith Empire and began to study under Maize Wayne's tutelage. Over the years, she became a powerful individual, even more than before now that the Dark Side was her ally. She mostly devoted her time between her training and exploring the galaxy to find more about Sith history and artifacts of various kinds.

Over the years, Alice Di Scarra proved a worthy member of the Empire and ascended to the rank of Sith Master.

Up to that date, almost all of Alice's family is dead, including the following members:

From her youngest age, Alice has benefited from personal educators who taught her in the following subjects: diplomacy, war, history (including Sith history thanks to her mother and her family's collection, which also led her to learn the Sith Language). As from her teenage years, she was also educated in botanic, alchemy and especially poisons.

On a physical training side, Alice was formed in martial arts and fencing since she was a child. She was trained along with her elder brother until the day she "accidentally" killed him during a spar when they were teenagers. Though she is mostly inclined to used swords, she was also given an ancient lightsaber, with a crimson blade, by her mother, which once belonged to one of Ragna's Sith lovers. Though she almost never used it, she did so a few times, even if she never fully got used to wielding it, due to no training in the arts of the Force before she finally joined the Sith.