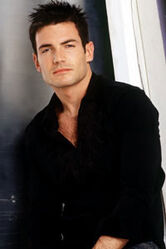 Mazen has a wry, quick sense of humor and a nice smile, but his Naval recruits seldom see that side of him. More often, he is intense and professional, demanding and challenging toward his pilots and officers.

Mazen is the younger of two sons of farmers Jorge and Airy Darksun, of Chandrila. His elder brother, Alek, is career army on Chandrila and has twin sons.

With Alexandra Darksun, he has a daughter, Lily.

Like many Chandrilan Humans, Mazen was born on a farm and born to be a farmer. His parents operated a considerable farm not far from the Gladean State Parks system. Like his elder brother, Alek, Mazen was schooled alongside other "farm kids" who lived on neighboring settlements, though none were particularly close-by. It was simply understood that Mazen would someday inherit the family farm; just the same, he was allowed to take piloting lessons which would later play heavily into his career choice.

Just out of school, Mazen met the first love of his life, Cela Farstarr. A fellow Chandrilan, Cela had grown up on a neighboring farm where her father raised animals. They'd grown up as "best friends" though that changed into something [seemingly] deeper at the Harvest Festival when Mazen was 17 standard years old. They'd rapidly become a couple and, unexpectedly, Cela had turned up pregnant. After considerable drama and family fighting, the young couple married and started their own farm on his father's property.

To help make ends meet, Mazen joined the Chandrilan Air Defense Squadron as a pilot. This was a critical move in Mazen's life for it would be a stepping stone in one way and the source of his grief as well. While Mazen was away on a training and maneuvers run with his fellow CADS pilots on the opposite side of the planet, an Imperial attack had strafed Hanna City where his wife and son had just happened to be, shopping. They were killed instantly by falling debris.

Mazen left Chandrila for Telos IV and joined the reformed New Republic. He was brought aboard as a Lieutenant, owing to his experience as a pilot in CADS. Mazen was instrumental at reviving Rogue Squadron, serving for a time as its CO until an accident grounded him for the time being.

A certain Tanaabian pilot, Alex Russo, won Mazen's heart early on, though their relationship faced its share of trials and hardships when Mazen had been injured in-flight. The injury - and his reaction to it - had proved to be too much and the couple had split up with Mazen heading back home to Chandrila with their daughter, Lily. Mazen never gave up on Alexandra, however, and when a chance to rekindle their romance came, he was willing all for getting back together. Whether their professions and space itself allows for that remains to be seen...

My character earned this rank on Feburary, 22, 2009, granted by Kelly Perris in There comes a time...

He is qualified to fly the following starfighters:

Mazen's preferred starfighter is the X-Wing for both technical and personal reasons.

My character earned this rank on August 14, 2009, granted by Jacob Evans in Performance Reviews? Promotions?!

In August 2010, Rogue Squadron was revamped once more with Mazen as its Leader. Torr Redeker left off the announcement of the new Rogue Squadron leadership in You Know What They Say About Echani. Mazen and Romon met to plan out the squadron's future in Plotting. Scheming. That Whole Deal.

Mazen was unable to last in the leadership role at Rogue Squadron due to problems with his hearing implants which defaulted to Talon Jai and Romon Darksands. Following the Imperial attack on Telos IV during the Druckenwell campaign the New Republic was committed to, Mazen became fired up about returning to active duty. He had surgery to repair his hearing and the implants' sensitivities.

Mazen was promoted to Commander on February 25, 2012 by Arestul Angellus in Republic Rebound with his return to duty.

So much to say, but so little time. :p