View source
watch 01:36
We're Getting Mutants in the MCU - The Loop
Do you like this video?
Play Sound
Bucket 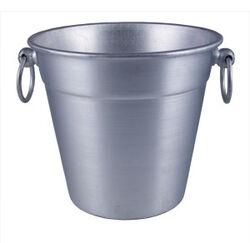 Bucket is the worst Jedi Knight. Everything he does, he does badly. He flies so badly the hangar techs are constantly griping about his wrecked ships. He bakes awful muffins. He once accidentally chopped a youngling's arm off while teaching a basic saber class. When Bucket goes shopping he always forgets milk, and when he house-shares he never, ever buys toilet paper. It is a matter of constant wonderment to those that have met Bucket that he is still both a Jedi Knight and alive.

Why does Bucket Exist?

Bucket exists for the sole purpose of having someone to whinge about in Jedi threads. He is a running joke. In fact, his name comes from the Australian late-90's drama show SeaChange.

Here is what the SeaChange wiki says about their Bucket:

"Another joke was 'Bucket'. This bizarre character remained an unseen character (except in one episode, in the background, when someone waves to him), but in almost every episode he was talked about. From various accounts he had no limbs or teeth, but was remarkably able to drive a boat; had never eaten a cereal grain in his life but tended to get drunk often and steal people's ride-on mowers. He would also often arrive home drunk and drink from his dog Alfonzo Dominico Jones's water bowl."

So you want to use Bucket? Feel free! Bucket is a man of the people. When using Bucket it is important to remember that he is a pompous loudmouth, and bad at almost everything.

You are welcome to use Bucket whenever you need someone to take a fall for you, or whenever you want to have an adventure at someone else's expense. Pranks, scape-goating and shenanigans are welcome.

Bucket's mother, father and pet goldfish were all killed by gangsters when he was a boy. He has never considered pursuing them or bringing them to justice.

Bucket once flew a ship through a field of 12 asteroids and crashed into 24 asteroids. He put the ship in reverse once he started feeling the bumps.

Bucket has one, sad padawan - conned into signing on as his student by a certain Ryn who did the interview. The padawan’s natural skill is almost as legendary as Bucket’s incompetence. Nothing he does, however, can prevent Bucket’s mishaps. The other students call him ‘The Drop in the Bucket.’

Bucket has mastered all 9 saber forms. Which is to say, he knows the usual five and another four ‘Extreme Forms’, that he invented for his own use. This mastery has never resulted in him winning a duel.

Bucket once tried to buy a house. It exploded when he purchased it it.

Bucket once managed to trip from one end of the Jedi Temple to the other. The Order's scientists are still attempting to discover how he managed to break the laws of physics to do so.

Bucket once lost a lightsaber duel against an unarmed tree.

Bucket's life has been a series of misadventures, extreme acts of stupidity sprinkled with a lot of bragging in pubs. He has been married twice, and loves the ladies.

(A brief history of the NPC's life, including any important details that might be referred to within IC posts. Please also include any friends, family, and/or enemies the NPC has.)

Generally disliked, hated by those in the Order with an affinity for mechanics as they often have to fix his ships while listening to his long winded tall-tails about how he fought off an entire sith armada to receive them. (Usually Terrance Wilkinson and Springly Coward) However, he has aquired a young follower who enjoys both his ridiculous stories, boorish demeanour and penchant for losing things, which never ceases to delight the youngster.

Only person ever to survive a hyperspace collision

Anti Skills - a list of things Bucket is unnaturally bad at

Piloting - widely considered the worst pilot in the order, if not the galaxy at large